The MMF-1 is the most flexible single filter. Additionally, the solution with variable SPACING (bandwidth) and two variable resonance peaks make it possible to create various vocal like sounds.

The Q-PEAK (also known as "resonance" or "emphasis") boost audio signals in the near range of the cutoff frequency and makes the tone sound more "cutting". From a certain level on, the filter start o self-oscillate and works as a sine wave-oscillator and in dual band pass mode (in dual Q-PEAK mode) produces two-tone sinus wave (the two-tones frequencies are controlled by CUTOFF and SPACING).
The q-peak can be controlled by knob Q-PEAK and/or by signal from levelled input Q-PEAK CV, levelled by  Q-PEAK CV knob.

The SPACING control defines bandwidth for all three dual band pass modes and/or spread of two resonant peaks. The amount of spacing can be controlled by knob SPACING and/or by signal from input SPACING CV.

The audio knobs AUDIO1 and 2 controls the audio signals level coming from inputs AUDIO1 and AUDIO2.
The audio output is provided by output socket labelled AUDIO and is revealed by white surround. 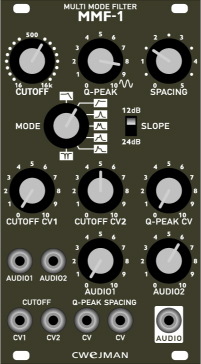